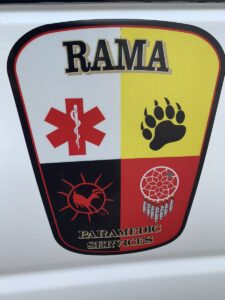 Circle of dream catcher represents everyone being equal.

Heart Stone represents our creator touching us with love.

Serpent and Staff is known as the Rod of Asclepius, a symbol of medical care used worldwide.

As you are aware, Paramedic Services are a fast-paced and rapidly growing industry.   At the present time, there are over fifty (50) different land ambulance services operating in Ontario alone, including nine (9) in First Nation territories. Coupled with the variety of service operators is a multitude of rank and insignia designations. This variety of rank and insignia systems can lead to difficulty understanding who is in charge in a seamless multi-municipal environment.

Now more than ever a consistent standardized approach to rank and structure is important. Over the past few years, there has been a movement across Canada to unite the Paramedic industry behind a common rank and identification system.

A standardized approach not only benefits  Paramedic providers but will benefit scenarios set in a multi-disciplinary setting. The newly standardized Senior Management titles are parallel with the titles of the other emergency services. Adopting these changes will help to place Paramedic Services on the same footing as other emergency services when it comes to incident command structure and public perception. With the introduction of the Canadian Paramedic Command Rank Structure Insignia, the Paramedic Service industry will now have a single rank insignia structure and nomenclature for provincial and national identification.

The objective of the Canadian Paramedic Command Rank Structure Insignia is to establish a national rank insignia structure for Canada’s Paramedic Services. The Paramedic Command Device includes a red maple leaf surrounded by Laurels and the provincial flower indicated for each province.

The Canadian Paramedic Command Device is composed of four elements:

Rod Of Aesculapius – the heraldic image of medicine

Provincial Flower – representing the Province in which the Service resides

Main Administrative Building
5884 Rama Road, Suite 200 in Rama.
Hours: 8:30am – 4:30pm
Human Resources, Lands and Membership, Health and Safety and Economic Development are located on the first floor.
All other business offices are on the second floor.